Money Won’t Make You Rich Autobiographies and Self Development Books

×Prices may differ slightly from the current shop price if the retailer has not updated them.
GHC 35 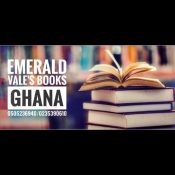 Want to know exactly where to buy money won t make you rich book in Ghana? Want to know its price? Get all that and much more right here on reapp.com.gh, your product information portal.

Achieve Financial Success…God’s Way! Pastor Sunday Adelaja helped 200 people become millionaires in just two years by teaching them how to apply God’s principles to their personal finances. Discover how they did it in Money Won’t Make You Rich, a comprehensive guide to true prosperity and financial freedom. When you understand God’s principles about finances, you can control your money without letting it control you. In this practical, inspirational guide, Pastor Adelaja combines biblical truth, financial advice, and his own life experiences to explain such topics as: – The meaning of prosperity – The nature of poverty – The secret of success and four principles of continuous success – Three laws to making your money work for you – The reason for financial failure And much more

Sunday Adelaja is the founder and senior pastor of the Embassy of God in Kiev Ukraine and the author of more than 300 books which are translated in several languages including Chinese, German, French, Arabic, etc.
A fatherless child from a 40 hut village in Nigeria, Sunday was recruited by communist Russia to ignite a revolution, instead, he was saved just before leaving for the USSR where he secretly trained himself in the Bible while earning a Master’s degree in journalism. By age thirty-three, he had built the largest church in Europe.
His work has been widely reported by world media outlets like Washington Post, The Wall Street Journal, Forbes, New York Times, Associated Press, Reuters, CNN, BBC, German, Dutch, French National television, etc.
Dr. Sunday Adelaja had the opportunity to speak on a number of occasions in the United Nations. In 2007 he had the rare privilege of opening the United States Senate with prayers. He has spoken in the Israeli Knesset and the Japanese parliament along with several other countries. Dr. Sunday is known as an expert in national transformation through biblical principles and values.
Dr. Sunday Adelaja is happily married to his “Princess” Abosede Dere Adelaja. They are blessed with three children, Perez, Zoe, and Pearl.
See other books right here.
Tags:bookBookschristian booksmoney won t make you richself help book