×Prices may differ slightly from the current shop price if the retailer has not updated them.
GHC 230 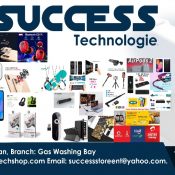 Want to know exactly where to buy apple watch magnetic charging cable in Ghana? Want to know its price and exactly which shops in Ghana have it for sale? You can get all that information and much more right here on reapp.com.gh, your product information portal. Always choose to shop the easy way!

We wanted to make charging your Apple Watch utterly effortless. Simply hold the connector near the back of the watch, where magnets cause it to snap into place automatically. It’s a completely sealed system free of exposed contacts. And it’s very forgiving, requiring no precise alignment.

Apple Incorporated is an American multinational technology company that has its headquarters in Cupertino, California in the United States of America. It is a company that designs, develops, and sells consumer electronics, computer software, and online services. Apple was founded by Steve Jobs and steve wozniack and has since grown to become one of the largest companies in the world. See other high quality products right here.