×Please scroll down gradually to store information section and order directly from the retailer. Prices may differ slightly from the current shop price if the retailer has not updated them.
GHC 650 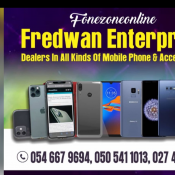 Know where to find the Motorola Droid Turbo 2 in Ghana! Get all that information and more on Reapp Ghana, your product information portal. With Reapp, shopping is easier and more enjoyable.

This sleek Motorola Droid Turbo 2 smartphone was first released in October 2015. This ultra modern phone comes with a 5.40-inch high definition touchscreen display. The touch screen has a resolution of 1440 pixels x 2560 pixels and a PPI of 540 pixels per inch. Amazing right? The Motorola Droid Turbo 2 is powered by a very capable 2GHz octa-core Qualcomm Snapdragon 810 MSM8994 processor. It is also equipped with 3GB of Random Access Memory (RAM). This Motorola phone has  32GB of internal storage. This can however be expanded by up to 2000GB using a microSD card. You will absolutely love the cameras. The cameras on the Motorola Droid Turbo 2 are just amazing. A 21-megapixel primary camera on the back and a 5-megapixel secondary camera for lovely selfies.The Motorola Droid Turbo 2 runs on a very powerful Android 5.1.1. It is powered by a 3760mAh non removable battery. This battery makes efficient use of energy and lasts very long on a single charge. The phones dimensions are 149.80 x 78.00 x 9.20 (height x width x thickness). Its weight is 169 grams. It is a single SIM (GSM + CDMA) smartphone and accepts a Nano-SIM. Its numerous connectivity options include but are not limited to Wi-Fi, GPS, Bluetooth. It also has sensors which include Compass Magnetometer, Proximity sensor, Accelerometer, Ambient light sensor and Gyroscope.

Motorola Mobility was first established in 2011. This development cam after the split of Motorola into two different companies. The other company was Motorola Solutions which catered to the enterprise segment. Motorola was soon purchased by Google and Motorola Mobility was sold to tech giants, Lenovo, in 2014. Motorola released its premier Android smartphone in 2009.